skip to main | skip to sidebar

Our family has seemed to be a little bit sick for a long time.  There has hardly been a time in the last several months when all of us have been well.  Last week I was treated for worms and Brett for giardia the week before that.  But we've still had lingering problems and Baylor has been complaining of a tummy-ache so we decided to just all go get tested for anything that could be found.  The results: Baylor has worms, I have an amoeba and Brett has both an amoeba and bilharzia.  My teammate Alicia said maybe we should all start eating lint off the floor as it seems to have worked for Harper. Ha.

We have all our medicine now so things should be improving.  I was reading through the accompanying information for my medicine last night and among the list of 20 or so side effects were listed "furry tongue" and "anorexia."  I am left to wonder whether I might actually grow fur on my tongue or if I will just feel like I have fur on my tongue.  I feel this incredibly technical medical term is a little vague.  And anorexia?  Can a medicine I take for 5 days really do that?  I'm going to assume they really mean loss of appetite and just lost something in the translation.  I always find lists of side effects a little humorous.

So that's what's going on with us lately -- that and Brett ran the Kilimanjaro marathon this past weekend despite the amoeba, bilharzia, and a cold on top of it all.  He has more stick-to-it-ness than I do.  Way to go Brett!
Posted by Brett and Christie at 1:05 PM 4 comments:

A couple of weeks ago we celebrated Harper's first birthday.  Our team came over and we had sesame street themed party complete with a Big Bird head cake.  Sorry Big Bird looks a little scary. He was made in the in the morning and by the time we ate him that evening, his eyes had mostly melted off.  But Harper didn't mind.  That girl loves to eat and cake is no exception. 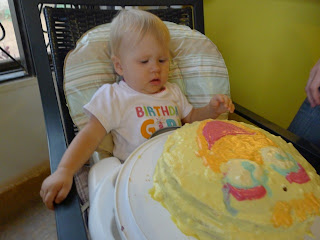 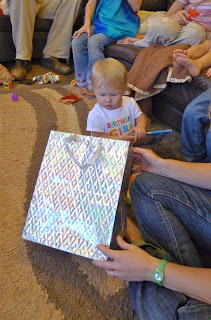 Harper is her own little person, and she continues to show us more of her personality every day.  Except for the past few weeks when she's battled a cough, a cold, and teething, she is typically a pretty calm, even keeled sort of person.  She does like her mama, though.  Sometimes a little too much.  No one can make her smile and laugh like her big sister, Baylor.

Harper's favorite current activities are riding on her little blue car, playing peek-a-boo, and rolling a ball back and forth.  She also truly loves to eat, despite only have 4 teeth. She often out-eats me and she always eats more than Baylor.

This past week she has started walking a little.  She can stand up well on her own, and today took 6 fairly steady steps, a new record.  She likes to clap and wave bye-bye and draw with chalk on our back porch. 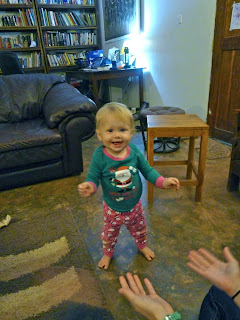 We are so happy Harper is part of our family, even Baylor, despite her grumpy words when Harper knocks down her block towers.  We'll try to take some better pictures sometime soon.
Posted by Brett and Christie at 6:04 PM 4 comments:

Today while driving down the paved road, Harper (who has been exceedingly grumpy lately, due to a cold) would not stop crying.  She cried for about 20 minutes straight until we turned on to a dirt road.  A very bumpy dirt road.  The crying immediately stopped.  Our children can be so Tanzanian.  I imagine she let out a sigh of contentment as we bounced our way home.
Posted by Brett and Christie at 9:15 PM 1 comment:

I Should Have Known

Living in Tanzania, we eat a lot of beans and rice.  The girls and I eat it almost every day for lunch.  It's cheap, easy, and pretty tasty.  Over the last month, though, with visitors and holidays around every corner, we've had a lot more variety.  I suppose Baylor has gotten used to that variety and so yesterday when I served her beans and rice for the third day in a row, she sat down, looked at her bowl, and said,

"I should have known you were going to do this to me."

Pretty funny.
Posted by Brett and Christie at 8:54 AM 2 comments:

I don't typically write year-end posts or make New Year's resolutions or Top 10 lists or anything like that.  But for those of you who know me, you know I love to read. And to mark the end of my" read during my free time for pleasure and get lost in a book" period and enter my "read text books not so much for pleasure however useful they might be during my free time" period, I have decided to list some of the books I have read this year that I really enjoyed.  I know that I am probably behind in most of these--remember, I live in Africa.  But still, maybe you'll see one that piques your interest.

These are in the order I read them this year.

1.  Country Driving -- A Chinese Road Trip  by Peter Hessler.
Narrative non-fiction at its best.  This is the third book in a series about China.  Perhaps I liked it even more because of all the memories of my time in China coming up as I read, but I still think anyone would find it interesting.

2.  Bel Canto by Ann Patchett
A beautiful book about the relationships between hostages and their kidnappers.  The book is a little slow.  I didn't realize how much I was invested in it until the very end when I found myself weeping.

3.  The Help by Kathryn Stockett
I was hesitant to read this book just because of all the hype surrounding it.  I usually find when a book is super popular I end up disappointed.  But this was great.  Not sappy at all.

4, 5, and 6.  The Hunger Games, Catching Fire, and Mockingjay by Suzanne Collins
Some people don't like this series assuming it's all about kids killing kids, but really it's about an oppressive government and the people who rise against it.  I couldn't put them down.

7.  Cutting For Stone by Abraham Verghese
This book is set at a mission hospital in Ethiopia.  It is the story of the physicians who work there.  I will say, this book might not be for everyone - the medical explanations are in great detail, often a little more than I would have wished.

8 and 9.  Progeny (the Children of the White Lions) and Prophecy (the Children of the White Lions) by R.T. Kaelin
It's been a long time since I've read a fantasy series this good.  It's creative and is even clean;  I'm not a fan of graphic violence, even in battle scenes.  The only downside is that I'll have to wait a long time to read the third one, as the second one only just came out.

10.  Dead Man's Folly by Agatha Christie
I love Agatha Christie; particularly Hercule Poirot stories.  This one was a lot of fun to read (provided you think murder mysteries are fun).

Posted by Brett and Christie at 1:39 PM 2 comments:

I am happy to announce that I will be starting graduate school in January at Lincoln Christian University.  I will be studying for a Master of Arts in Teaching English to Speakers of Other Languages.  It's a fully online program, 21 months long, so I can complete it from right here in Tanzania.  On an even better note, I have been given full scholarship!  Praise God for his provision.

I've been thinking about doing this for sometime.  We decided while I'm at home more now anyway, what with two little ones, it's the perfect time.  While teaching ESL was never something I really envisioned myself doing, it keeps popping up in my life.  First in China, then in Tennessee, and now in Geita.  I am happy to teach people who ask me, but I feel like I'm at a point where I need to have more formal training.  I see no reason to teach people badly.

We also would like to eventually become self-supported missionaries.  And while that's probably not going to happen teaching English here in Geita, it could elsewhere in the future.  It also opens up doors to places that are closed to Christians coming in just to teach Jesus.

I'm excited about being a student again.  Maybe I won't be in another year, but who knows?  I'm looking forward to it all the same.